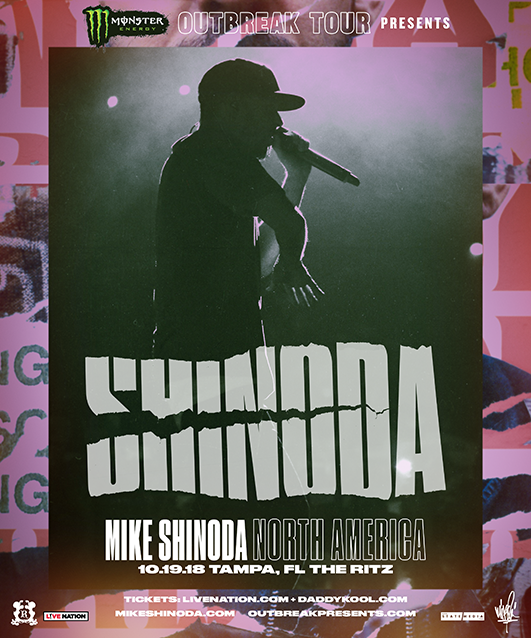 Tickets are available online at LiveNation.com + DaddyKool.com
VIP: vip@theritzybor.com (VIP is ages 21+ only)

In the days and weeks that followed the tragic suicide of Linkin Park’s Chester Bennington last July, Mike Shinoda had the same conversation with everyone. “First they’d ask, ‘How are you?’ and then they’d ask, ‘What are you going to do?’” he says. “I honestly couldn’t come up with an answer that felt like it was the answer. That time was a blur; my reality had been turned upside down and I was just completely lost at sea. So I started trying to pinpoint some things that I could do, to anchor myself and feel like I was attached to the real world again.”

Shinoda, who founded Linkin Park around the time he started at Art Center College of Design in 1996, did what he has always done to process his emotions: he made art. “I wasn’t eating or sleeping well, so I eventually started making some music and painting. It was meditative in a way, but also scary. For so long, all my creative output was focused on the band. But I reminded myself that I had made music and art all my life before Linkin Park. Not only could I do it, this was necessary in order to move toward recovery.”

With no agenda, Shinoda hunkered down alone in his Los Angeles home and began writing, recording, and painting. The result is the upcoming Post Traumatic, a transparent and intensely personal album that, despite its title, isn’t entirely about grief, though it does start there. “It’s a journey out of grief and darkness, not into grief and darkness,” Shinoda says. Ultimately, Post Traumatic is an album about healing. The songs, though specific about Shinoda’s experience with loss, manage to be universally relatable, thanks to their honesty and heart. “If people have been through something similar, I hope they feel less alone,” he says. “If they haven’t been through this, I hope they feel grateful.”

In January, Shinoda released the first three songs as an EP — each one a powerful, stream-of-consciousness expression of unvarnished grief, accompanied by a homemade video. “Place To Start” ends with a series of condolence voice mails from friends. In the video, the messages play out over shots of Shinoda’s kids’ bedrooms. “I used those images to remind people that this is real life — that real families have been affected on a deep level,” he says. The way the voice mails are stacked one after the other is a stark reminder that Shinoda has been a main repository for all of the emotions that Bennington’s death unleashed in the Linkin Park community. “It felt like a responsibility I didn’t ask for,” he says. “I’m a member of a club I don’t want to be a part of.”

Those qualms surface on the raging “Over Again,” which captures the visceral anxiety Shinoda felt before performing a three-hour tribute show to Bennington at the Hollywood Bowl in October. The stunningly raw verses, which were written the day-of and the day-after the show, include these lines: “’Cause I think about not doing it the same way as before / And It makes me wanna puke my fucking guts out on the floor…Everybody that I talk to is like, ‘Wow / Must be really hard to figure what to do now’ / Well thank you, genius, you think it’ll be a challenge? / Only my life’s work hanging in the fucking balance.”

And yet, as he dove further into his work, Shinoda found moments of hope and relief. The final song on the EP, “Watching As I Fall,” ends on an optimistic note. “It’s about how shit couldn’t get much worse and yet, this new path has to lead somewhere,” he says. “That song is the entry point into the rest of the music. Stepping back, I’ve learned so much about writing and producing over the years, and I’m more equipped than ever as a songwriter. It’s weird to think about it, but many times, hitting rock bottom brings on a creative high.”

His inspiration and craftsmanship are on full display in the album’s first single, “Crossing A Line,” which finds Shinoda making an honest admission that he’s worried about his best friends feeling abandoned as he ventures out by himself. “The idea of going out and doing this alone, first of all, is totally risky,” he says. “Second, everyone in the band has already suffered a loss, and this might feel like another blow on top of it. But I had to put my faith in the idea that the guys know me better than that — they know that I’m not abandoning them or Linkin Park. That’s why the chorus is, ’They’ll tell you I don’t care anymore / And I hope you know that’s a lie.’ When I sent the song to them, their responses were so heartwarming. I’m constantly reminded what incredible friends they are.”

Although he took a break from Linkin Park in 2005 to pursue a hip-hop project called Fort Minor, Post Traumatic is the first album that Shinoda will release under his own name. “The reason is, not only is this album very personal, but it also doesn’t sound like Linkin Park,” he says. “I listen to so many different types of music, and I think that’s reflected here. There are tracks that bridge the gap between my favorite adventurous hip-hop records, modern indie-electro tracks, and subversive pop sounds of my favorite ’80s stuff. I love some of the sonics on old Peter Gabriel, Phil Collins, and Tears for Fears records.” The synth-driven sound is the perfect backdrop for the lyrics, which have moments of levity, warmth, and even humor. “I mean, the video for one song is going to feature sock puppets,’” Shinoda says with a laugh. “I’ve come a long way from sitting in my studio in the dark.”

In May, Shinoda will headline IDENTITY LA, a free festival in Los Angeles, then head to Japan to play the Summer Sonic Festival in August. With touring on the horizon, his fans quickly started a campaign on the website WeDemand.com, attracting thousands pledging to turn up for shows around the world, including in Russia, Ukraine, Kazakhstan, Europe, and South America. “I’m looking forward to getting back to releasing music and touring,” Shinoda says. “Those things are ‘normal’ to me — it’s what my professional life has revolved around for years. And I know this will be different, so I’m excited to figure out what this new normal is.”

ICYMI... the one & only @excision headlines our st